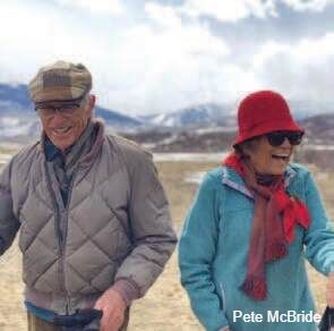 John and Laurie McBride were made for each other. Both share twinkly eyes, infectious grins, and a ready laugh – not to mention a resounding passion for protecting good land and the wild creatures that share it. Long involved in conservation here and abroad, the McBrides most recently founded a conservation education program in Kenya that brings Roaring Fork valley youth to experience the magnificence of the African landscape, its people, and its iconic wildlife.

While Western Colorado long ago lost much of its bison, wolves, and grizzlies, and nearly exterminated its elk during the Gold Rush (by 1910 fewer than 1,000 elk were estimated to remain in Colorado due to overhunting), it is still home to its own spectacular landscapes and iconic wildlife. Today, the major threat to these animals comes not from hunting, but from the rapid loss of undisturbed, quality habitat.

Appreciation for this landscape and its wildlife is why the McBrides purchased a large ranch far up the remote Capitol Creek Valley in 1979. When John mentioned his plan to friends, they told him he was crazy – a sentiment that gave rise to the name “Lost Marbles Ranch.”

The McBrides have now lived on that very ranch for over 40 years, and raised three kids in the same modest ranch house they live in today. Lost Marbles hosts the same diverse habitat and rural ranching character as the day they bought it and conserving it so many years later will ensure it stays that way forever. “We feel it’s the right thing to do for the land and the wildlife that inhabit it,” said John.

The entire family supported the decision to protect these 1,870 acres – encompassing much of its own valley. In 2019, they culminated years of work by donating a conservation easement to AVLT that sets this land aside for ranching, water, and wildlife. Daughter Kate remarked, “It is wonderful that three generations of our family support this move to protect land that hardly changed since homesteaders first came here in the early 1900s.”

Bordered by public land, this branch is now part of a 5,300-acre corridor of private land conserved, including the nearby Capitol Creek, Harvey, and Weiben ranches. As both working land and wildland, Lost Marbles is home to scores of species – large and small – that fly, swim, browse, burrow, migrate, winter, and raise their young within the ranch’s protective folds.

“Considering many in our family have worked directly or indirectly in land and water conservation for years, we are proud to do what we can locally,” said son Pete McBride.

“We are lucky to have an organization like AVLT to help make conservation an everlasting reality in our valley,” Laurie says. “We hope it inspires others to consider similar options.”

We, in turn, are lucky to have families like the McBrides, and so many other hardworking ranchers, farmers, and land stewards who have stepped up over the years to save what matters most for the health of our land, its wildlife, and our future.
​

​​​WE NEED THE LAND, AND THE LAND NEEDS YOU

You can protect the future of our land